In the aftermath of the incident last week, the librarian reveals that Nakao may be been dead before being hit by the boat. Essentially, he took a blow in the head before leaving Yomiyama, so the cause of his death occurred while still in the town. Kouichi talks with Teshigawara and Yuuya they conclude that Matsunaga must be talking about the class 3 homeroom in the old school building and agree to investigate it together.

They run into Mei, who goes along with them. They eventually find a tape recorded by Matsunaga. He talks about the class trip to the shrine and how praying there had been ineffective, but Teshigawara damages the tape before he can say how he saved everyone. While this is happening, more people are falling victim to the curse. 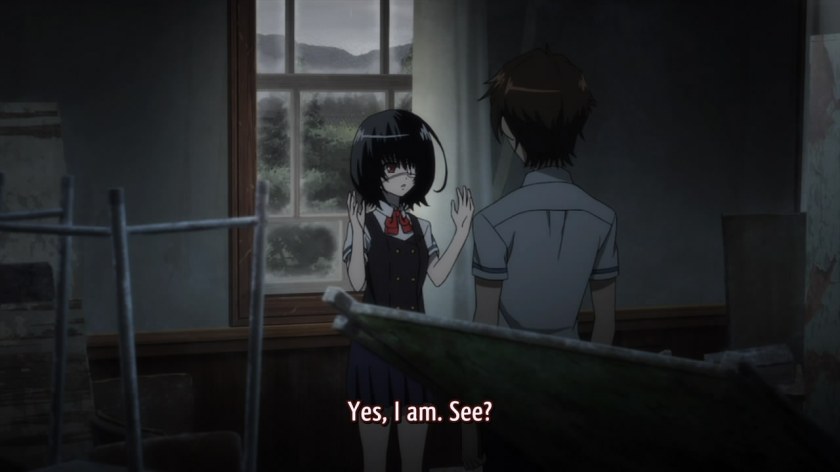 These cliffhangers are killing me inside. But still, with three episodes left to go, I suppose it’s still too early to find out how to solve everything. My guess is that Yuuya will die, but will be able to fix the tape first. Also, Matsunaga mentioned a sin, so I’m guessing he had to kill someone to lift the curse. Maybe kill more than just one someone? Massacre, maybe? Another interesting fact is that the librarian is the drama club adviser. A talented actor like that…maybe he’s hiding something. Also, I’m glad Sakuragi was just another one of Kouichi’s crazy dreams. The last thing we need is zombie people. It’s interesting that they chose to explain Nakao’s death the way they did. Rather than have the curse grow stronger or make people question the validity of the curse’s restrictions, they allow the curse to remain a constant, unbending force. I wonder how significant that is. I’m still enjoying everything, and I’m looking forward to see how everything concludes. Mostly because I GOTTA KNOW!

9 thoughts on “Another Episode 9”