So, another show from the Sengoku era. Unlike Sengoku Basara, this show has Yukimura depicted as a lord, rather than a simple soldier. The story follows Saizo Kirigakure, an assassin who is recruited by Yukimura, who is attempting to gather ten warriors to fight for him. Unfortunately, most of the story ends up just being about finding the ten people. It’s not really until like episode 9 or 10 that you find out exactly why Yukimura is doing it. When stuff actually starts happening, it happens pretty quick. It’s really the kind of plot you’d expect from a show like this. Still, there’s a lot of good action and fighting in these episodes. Maybe it’s a curse of shorter shows like this that pacing is such an issue. The ending is also too abrupt…no real warning. They also kill the main antagonist in a pretty cheap way…especially when he was beating all over Saizou in every other episode.

The characters were decent, I guess. Each of the 10 heroes embodies a different element, which becomes pretty obvious in their personality. Character development is only really seen in Saizou, and maybe Isanami. The other characters remain fairly static, and you only get background from a couple of them. I don’t even know if that wind person was a guy or not…so confusing. As for Saizou, his character development is pretty straightforward…nothing surprising. He starts off as the cocky and standoffish guy who slowly softens as the show goes on. Isanami isn’t that much better. She’s introduced as a fairly carefree and cheerful girl that houses some deep dark secret that she eventually is forced to accept with Saizou’s help. Also…she’s pretty annoying >.> Date Masamune makes some appearances in the show, but he really isn’t a central antagonist like you would expect for a show with Sanada Yukimura.

Animation in this show good. I didn’t really notice anything weird, and the fights looked okay. Pretty much what you’d expect from a battle anime…decent fights and random names for attacks. Characters designs seemed okay to me…I guess my reaction to it was “indifferent.” Music seemed pretty suited for the era and for the fighting. It worked for the show. The opening theme is a bit strange…I’m okay with listening to it, but it just seems off for some reason. The ending theme was pretty good, though…I liked it. Yeah, the voices sound distorted, but it just sounded cool to me.

In the end, this is a show I’d show only to people who really liked mainstream or something. Although, that may be a bit much…not even sure if Bleach fans would like this show excessively (I have a test subject, though…I’ll let you know of the results). I also have a friend who says he really likes Sengoku era shows, so I guess this might be for him too. I’d say that you could watch this show if you’re just looking for some battles without having to think too much. Otherwise, there are probably plenty of other Sengoku shows that you could check out.

In response to Isanami’s kidnap, Yukimura sends out Ana and Sasuke. Meanwhile, Date explains that Kushi-mitama is one of four Mitamas that he plans to collect. Sasuke tries to free Isanami, but she refuses to return to Ueda, still blaming herself for Saizou’s injuries. Ana ends up freeing Isanami, lecturing her for her behavior.

Yuri ends up joining Yukimura out of respect while Saizou remains distant to Isanami. Sasuke berates Saizou for not accepting his weakness, trying to convince him to fight for someone else. With everyone back to normal, Rokurou extracts the events from the underground chamber from Saizou’s memory with his eye. 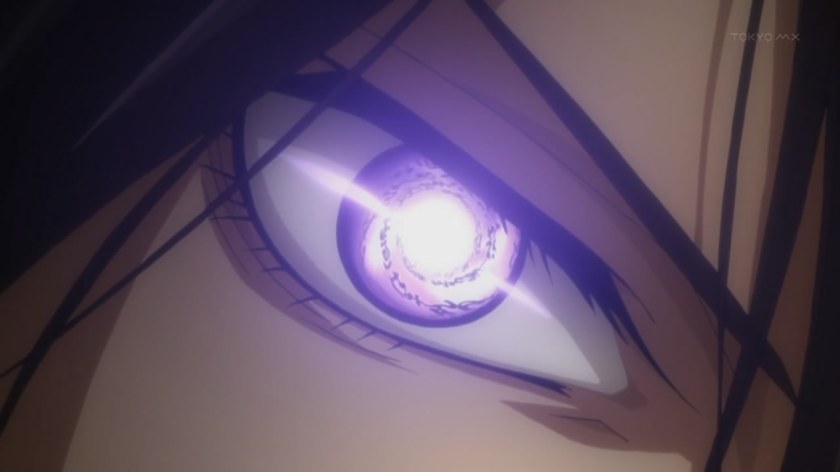 Well, that was underwhelming. That big capture of Isanami and then Sasuke and Ana just go and get her back in half an episode? What was the point? I guess Isanami and Saizou both get lectured in this episode and that’s supposed to be part of their character development or something. We’ll see next week whether it had any effect. I wonder if Date will try to fight Yukimura or something…that would be something to see.

So this week’s episode starts off with Isanami, Saizou, and Kakei arrive at the Izumo shrine. Isanami tries to act strong, but she’s clearly upset about Izumo being in ruins. They look around and eventually find a puzzle that only Isanami is able to solve, opening a path underground. They are followed by Hattori, who is after the Kushi-mitama, which is Isanami’s hairpin.

Saizou starts to fight against Hattori and Kakei fights against the snake woman. They’re both getting beaten, but Yuri shows up to help. Kakei is able to beat the snake woman by shooting through himself. Yuri and Saizou also team up to take out Hattori. While they are recuperating after the battle, Date Masamune appears to kidnap Isanami. 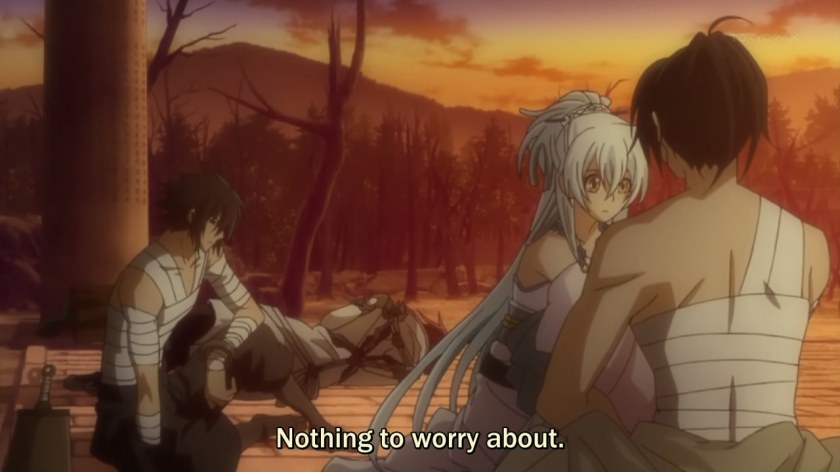 So Saizou still keeps getting owned by Hattori. I figured from the opening that Yuri would become an ally, but I wasn’t expecting it to happen so quickly. Kakei was pretty epic shooting himself, but I wonder if he actually killed that woman. Poor Isanami…it’s just not her day today. Next week, I guess it will be the rescue mission or something. We may also learn about this Kushi-mitama from Masamune.

So this week’s episode starts off with Yukimura telling Saizou to take Isanami to Izumo, so she can find what’s so important there that people were sent to kill her. We’re also introduced to Kakei Juuzou, another person working under Yukimura and ends up going with them. While they’re traveling, they find an injured woman on the side of the road, but she turns out to be a (male) ninja named Yuri Kamazuke and kidnaps Isanami.

Saizou ends up climbing a cliff face to reach Isanami and starts fighting Yuri again, but this time without a terrain disadvantage. Saizou ends up going berserker mode in the fight, beating Yuri in an instant without any emotion. However, Isanami stops Saizou before he can kill Yuri.

Okay, this episode’s beginning was just…goofy. Isanami was all over Saizou and flirting with him. Kind of an interesting thing to see with all of the random fighting >.> Isanami being a sort of humanity for Saizou is a bit cliche for my taste, but I guess it’s shounen, so what do I expect? Still looking for a direction for the show, but battles are fun and Isanami is definitely the comic aspect of the show.

So the opening had the same tune, but different words…what’s up with that? It totally threw me off. And why change in the third episode? Also, Yuri is in the opening, so recurring character? Looks like next week is the return of Hattori. I end with one important question: Why the heck is Persona 4 so late??? 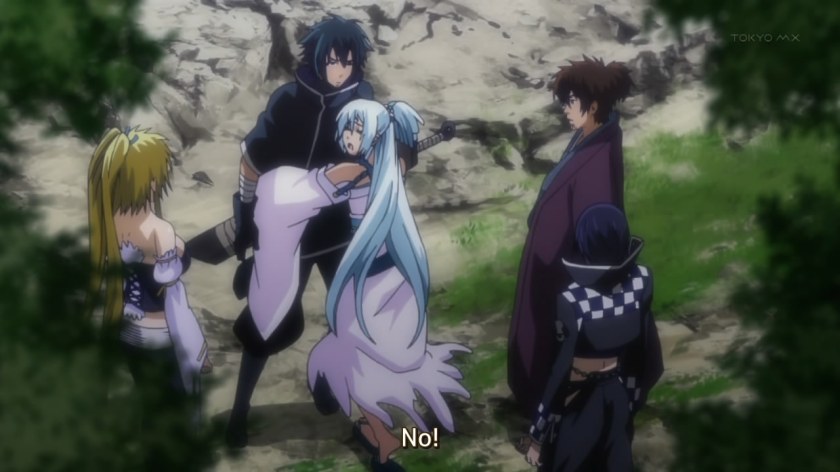 This week’s episode starts off with Saizou once again giving Isanami the cold shoulder and running off to be alone. He then runs into a childhood friend, Ana, who is under employ of Yukimura as well. When Yukimura and Isanami appear, Ana tells them all about a serpent that’s rumored to be killing people in the area. Saizou goes out looking for the snake, with Isanami tagging along. The two find the serpent, but it turns out to be an exploding puppet controlled by someone else.

The explosion traps Saizou and Isanami underground, where Isanami tells Saizou what he means to her before Saizou gets them out. Meanwhile, the castle is being attacked. Sasuke faces off against the serpent’s master, refusing Ana’s help. Meanwhile, the other attacker goes after Isanami, introducing himself as Hattori Hanzo, who she recognizes as the man who attacked her shrine. 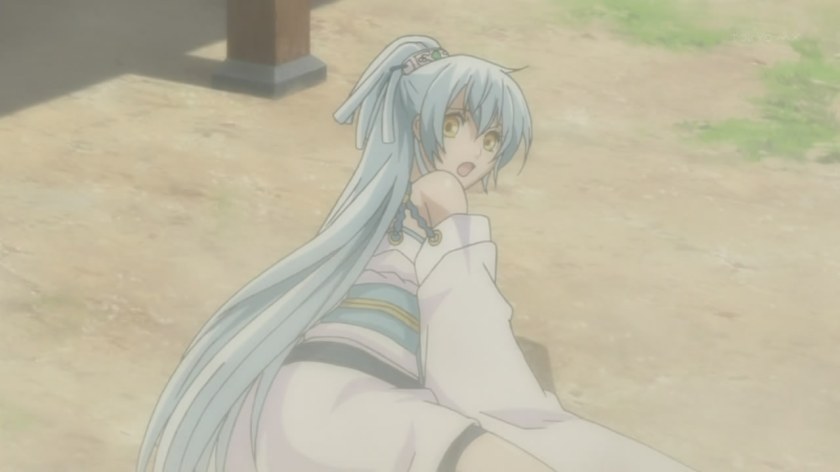 Saizou arrives to fight against Hattori while Rokurou and Yukimura take out the stragglers. Saizou is getting owned, but Isanami’s words motivate him to continue fighting. When Sasuke and Ana arrive, Hattori retreats. Pretty interesting episode. This show is starting to seem almost DragonBallZ in the way that all of the attacks happen without anyone actually making a movement. It’s just flash…blood..

Next week it looks like another one of Yukimura’s ten warriors will be appearing? I kinda doubt it’s another enemy. We still don’t quite understand the nature of the enemy or why Yukimura is gathering heroes, but I guess we’ll see. Also, who is Hattori to Saizou? He seemed to know a lot about him, so I wonder if they have a past. More next week, I guess.

Alright winter season. Let’s check out another show. For starters, we’re introduced to the strange man Kirigakure Saizou, who seems to be our lead. The series begins with him saving a girl in distress named Isanami (presumably a reference to the goddess Izanami?). Saizou ends up following Isanami around until they are attacked by Sarutobi Sasuke, a ninja of Sanada Yukimura, who turns out to be who Isanami is trying to meet.

Isanami is seeking Yukimura’s help after her shrine was destroyed by a masked man. Yukimura ends up refusing to help, not wanting to jump into a matter he doesn’t understand. Isanami follows Saizou out of the castle, but they are ambushed. Yukimura and Sasuke appear, though, having expected the attack.

Saizou takes out the attackers, but Isanami freaks out when blood gets on her and unleashes some dark power that annihilates everything in a radius around her. Yukimura agrees to help Isanami, and she also requests that Saizou join Yukimura as well. Saizou later overhears Yukimura talking about gathering ten heroes.

Definitely an interesting show. Isanami’s a nice source of comedy, while Saizou plays a sort of hardcore cool guy. Saizou seems like the type to have some sort of dark past as well…death of a friend? It’s an interesting premise and all of the attacks and stuff are pretty cool. I’d say the opening theme was alright, with the ending theme a little better, and the other background music being a bit better than that. I’d definitely intrigued and will keep watching. I was expecting Sengoku Basara, but this seems to be a bit different.