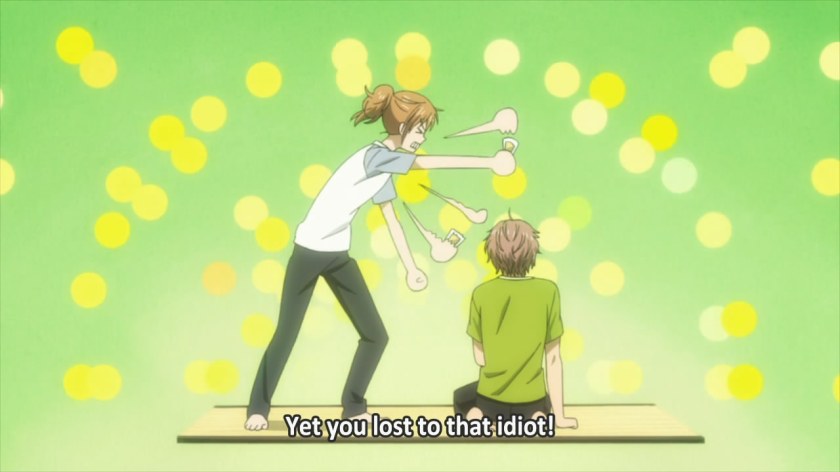 New characters! We’re introduced to a girl named Oe Kanade, who is in the archery club, but has a tendency to miss practice and isn’t that great at it. Instead, she reveals that she only wishes to wear traditional clothing. She stops by the karuta club room to see Taichi and Chihaya playing.

Chihaya notices Oe watching and chases her down, finding out that Oe actually knows quite a bit about karuta. Chihaya asks her to join the club, but Oe refuses because they don’t wear hakama (what an interesting mode of reasoning). 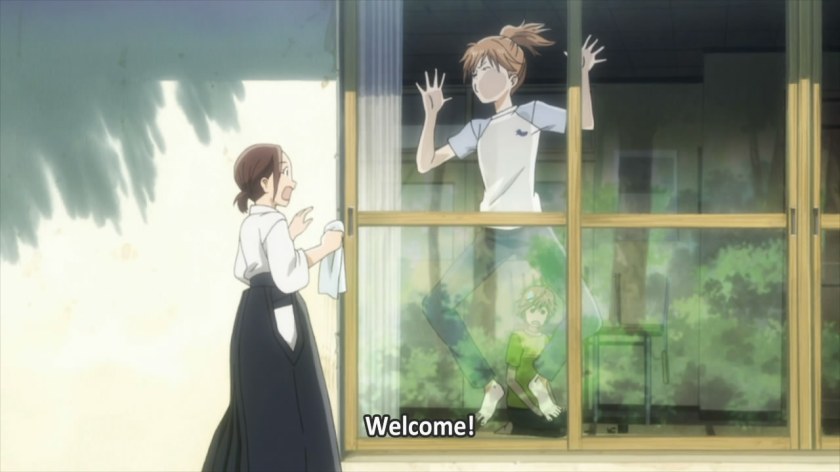 Chihaya starts to follow Oe around, trying to convince her to join them. Chihaya eventually follows Oe back to her family’s store, a traditional clothing shop, where Oe tells her the history behind the Chihayafuru poem, as well as many more of the Hundred Poems.

The next day, Oe returns to the club room and finally joins the club, with the condition that they all wear hakama during matches. An interesting episode, I guess…New characters are usually not a bad thing. Not sure why, but I’m not a huge fan of Oe’s character. I guess now the show’s going to devote an episode for each of the remaining club members? At least two more. Well, we’ll just have to see. 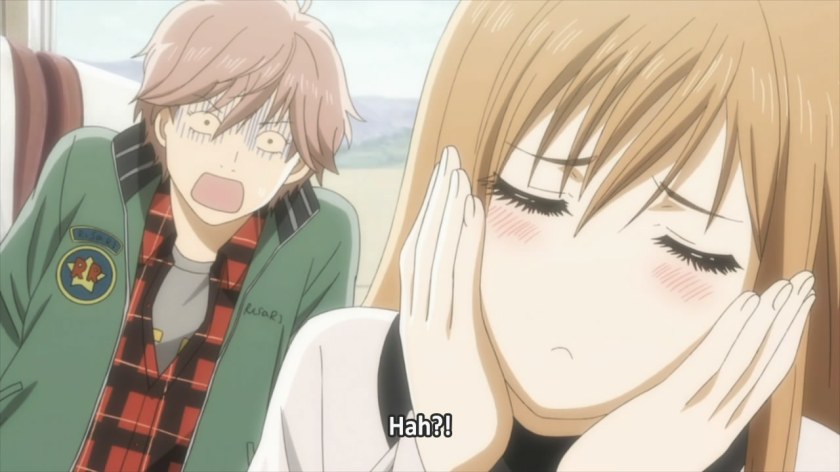 Last week, we left off with Arata telling Chihaya that he’s stopped playing karuta. In this week’s episode, we see that Chihaya has taken the calm and rational approach in reaction, which involves immediately setting off with Taichi to go see Arata (way to keep your cool). On the way, Taichi starts to rekindle the feelings he had for Chihaya.

When they get to Fukui, Arata’s neighbor tells them they can find him at the bookstore. They start to rush over and run into Arata while he’s on his way home. Although Arata allows them to get cleaned up at his place, he quickly asks them to leave. Chihaya suggests they play karuta, but Arata continues to reject karuta. 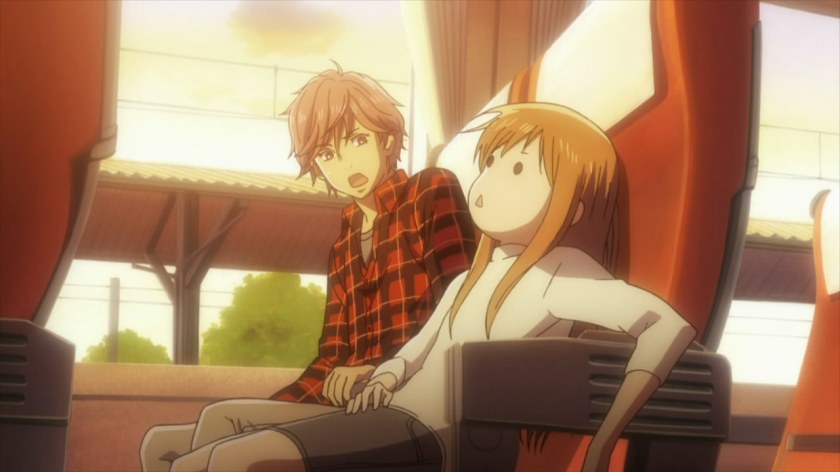 Chihaya realizes that Arata’s grandfather has died (pretty much like I figured), but Taichi quickly drags her out of the house. Arata’s neighbor explains how Arata’s grandfather originally had a stroke, and eventually died of a relapse while Arata was away at a Class A tournament (well…again, like I predicted).

Meanwhile, Arata reads the letter that Chihaya leaves for him, as well as the memos she leaves for herself. As Chihaya and Taichi are leaving on the train, Arata chases them on his bicycle (they can’t really do much because the train window doesn’t open, though). Chihaya finally realizes that Arata doesn’t really hate karuta and truly does care about the two of them. Taichi then offers to help with the karuta club.

Well, it looks like all of the background stuff is over and done with, so the actual story can start. I suppose some of the things that have happened (and are going to happen) have gone down a pretty predictable route, but I figure those sorts of things can’t be helped in stories about games. Naturally, I suspect that Arata’s in a “Hikaru after Sai leaves” state that will have to be broken. Still, the game itself isn’t particularly overbearing in the plot, which can be a good thing or a bad thing. I don’t really mind it so far, so I’ll keep watching. This week’s episode starts off with Chihaya and Taichi seeing Arata off as he moves. After that, we finally move back to the present, right back where we left (with Chihaya on the train with Taichi). Chihaya ends up forcing Taichi into an agreement to help her with the karuta club if she is able to make Class A in the coming tournament. Taichi goes back to the karuta society, where the owner Harada instantly recognizes him. Taichi talks a bit with Harada, where he reveals that he gave up karuta after realizing that he wouldn’t be able to surpass Arata. Taichi continues to watch Chihaya progress through the tournament, surprised at how far she’s come. In her finals match, she faces off against someone who has been stuck in Class B for three years. He ends up gaining an early lead due to his aggressive play, and seems to know how Chihaya plays. However, Chihaya starts to make a comeback as the game continues, and the two continue to pass each other the Chihayafuru card (as they both know it’s Chihaya’s strongest card). The game ends with Chihaya winning, and because it’s anime, the game is won on the Chihayafuru card (yeah…). After making Class A, Chihaya finally calls Arata, but he asks her not to call him again, as he’s stopped playing karuta.

Well, this series is a tad predictable, but so far, I don’t really mind. I’m sure Arata’s thing has something to do with his grandfather. Maybe his grandfather died and he started hating karuta because it caused it or something like that. Guess we’ll find out. Definitely glad the story came back to the present…living in the past is boring. This week’s episode starts off with Taichi, Chihaya, and Wataya going together to a karuta society (which I’m assuming is the karuta form of the go salon). When they enter, Chihaya starts to realize that karuta is taken very seriously. The three are welcomed by the proprietor of the society, but Chihaya manages to piss off one of the players, leading to a 3-on-3 karuta match. Wataya explains the rules to Chihaya, also explaining strategy to both Chihaya and Taichi. When Taichi suggests Wataya play himself (as he would crush them), Wataya explains that he’s always wanted to play in a team. However, when the game starts, Wataya is able to handle all three roles himself, leaving Chihaya and Taichi doing practically nothing. Taichi starts to wonder if Wataya truly trusts them, but Wataya’s next movement blocks their opponent, leaving the claiming of the card on their own side to Taichi. Chihaya’s reaction speed is able to beat Wataya’s when it comes to the cards that she knows, which prompts Wataya to start competing with her for her cards (leading to Chihaya getting crushed by her own teammate). When the game finishes, the three have won overwhelmingly. Wataya introduces himself to everyone in the room, who recognize him as a national championship winner in his grade, as well as the grandson of an Eternal Master. The owner then tells them about a team tournament in the coming March (although the three will be playing individually instead). The three start to train together and become close friends (Wataya finally asks them to call him Arata, his given name). However, Taichi is accepted to a middle school that’s farther away from everyone else, making karuta impossible. Arata is also planning to leave after graduating due to his grandfather falling ill. Chihaya runs off, realizing that she cannot play karuta with Arata and Taichi forever. Chihaya tries to return her karuta cards to the owner and ends up talking with the owner about the other two. On the day of the tournament, Arata arrives with a cold, and Chihaya is nowhere to be seen. However, Chihaya’s mother gives her a shirt that the others brought for her and she rushes over to the tournament. In the end, the three lose. At the graduation ceremony, Arata slips away to pack back at his house. Taichi and Chihaya notice this, though, and go to his house to play karuta one last time. This seems like an ending point for the flashback session…hopefully, the story will go back to the high school phase. The flashback was pretty cute, though. The story is still in flashback mode, as Chihaya arrives at school the day after going to Wataya’s house to find that everyone is ignoring her. She stands up for Wataya in front of the entire class, praising his ability at karuta. This inspires Wataya to speak to the class, saying that none of them could take a single card from him in a game. With that, a karuta tournament begins. Initially, Taichi does well, but then Wataya amazes everyone with the same speed that he showed against Chihaya. Taichi and Wataya end up making it to the finals. However, Taichi finds a chance to steal Wataya’s glasses before their match. Despite not having his glasses, Wataya is still able to use his normal speed, having memorized the positions of the cards. However, Taichi switches two of the cards and Wataya makes a mistake, allowing Taichi to take a card from him. Wataya starts to fear that all of the cards have been moved, so he starts to hesitate and Taichi keeps scoring. However, Chihaya knocks Wataya aside to take his place. Chihaya has a marked disadvantage because she hasn’t memorized all of the cards, but is still able to score on the first one (making a scene in the process). Chihaya starts to use rather cheap tactics, knocking away cards that Taichi is looking at to ensure that she gets the right one. They go down to the last card, but Chihaya doesn’t recognize any of then at first. However, she realizes that one of the cards is the Chihayafuru card, which (since it’s an anime) is the card that is called and she wins. Wataya praises Chihaya’s talent after her win, telling her she has the potential to be the Queen for karuta. Later, Chihaya tries to tell her family, but they are uninterested. Also, Taichi’s mother scolds Taichi for losing. The two then find Wataya practicing by himself. When Chihaya rushes off to once again look for Wataya’s glasses, Taichi returns them to him, reluctantly admitting to stealing them, but begging him not to tell Chihaya, fearing she will hate him. The episode ends pretty cutely, with Wataya finding the courage to call Chihaya by her first name. So yeah…I’m guessing this is the end of the flashback part (I’m sure there will be bits and pieces in the future episodes). Hopefully, we’ll go back to high school (high school Chihaya looks better). So far, I’m finding this show entertaining. 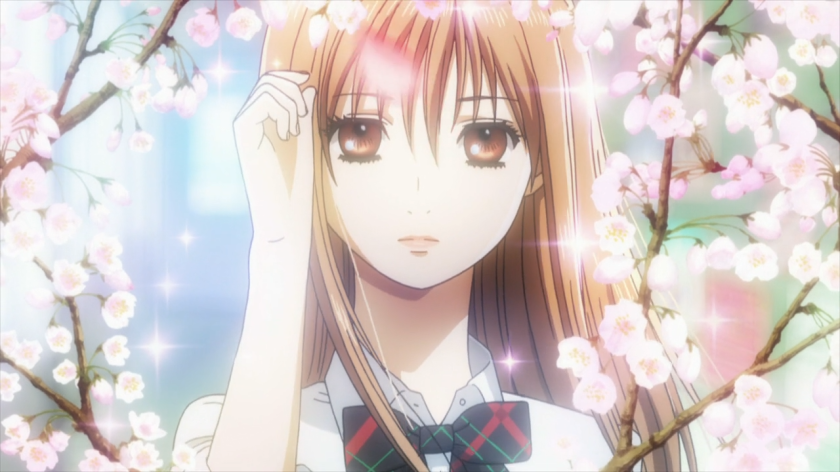 Alright, so for starters, we have a school and a girl named Chihaya Ayase, the sister of a model who is putting up flyers for a karuta club. Apparently, karuta is some sort of Japanese card game. Chihaya’s having trouble finding members for her club, and runs into her childhood friend Taichi. Chihaya is surprised that Taichi has a girlfriend now in high school, and is no longer interested in karuta. She remembers back to before she started playing karuta, when a transfer student named Wataya enters her class. He is teased by the other students because of his appearance and how quiet he is, but has really good memory. Chihaya notices this and starts to hang out with him, which makes Taichi mad. One day, Chihaya goes to Wataya’s house after they are both soaked in the rain. There, she starts to talk with Wataya about dreams, and he introduces her to the game of karuta. Basically, it involves something with cards and poem verses, but Wataya has the upper hand because of his memory. Based on observation, you remove a card, which has the second verse of a poem after hearing the first voice from a tape player. Wataya is crusing Chihaya, but she resolves to get at least one card, which she manages to do. Wataya then tells Chihaya his dream of becoming a karuta master. So yeah…a show about a game…where have I seen this setup before? I’ll give it a shot. Music was pretty good (the opening has a familiar tune to it), and the character designs are kind of reminiscent of like shoujo manga character designs.