Enjoy watching people try to kill each other? Well, have I got the series for you!

This one’s a short one. The premise of the murder game is simple. There is a group of people (the “rabbits”) trapped together, but one of them is secretly trying to kill the others (the “wolf”). Either the rabbits find the wolf and kill it or the wolf kills all of the rabbits. I will go ahead and warn you that the ending is not that great (culprit is very predictable and employs a flimsy mechanic to trick everyone). But hey…people get murdered, so if you’re into that, go for it! Also, if you really like this series, there’s a sequel called Judge, which you could also read…

I debated using a picture of the main heroine naked to bait people into reading this series, but decided that might be too mean. This series has the murder game take the form of a mobile game of sorts. To the outside world, it seems like an innocent game, but the players are actually trying to kill each other. The main character gets invited to the game by an old friend of his, who dies immediately after sending the invite. The players in Darwin’s Game are each given a supernatural power to help them as they battle each other, which I think is a stupid reason to give the series the name “Darwin’s Game”, but whatever. 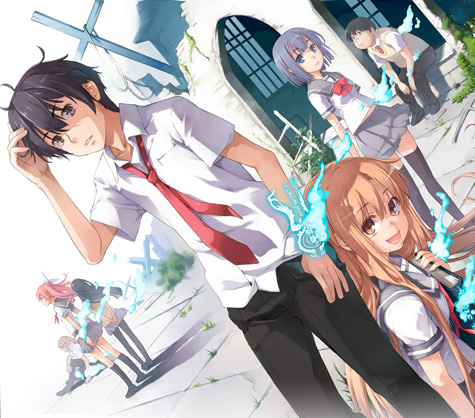 What’s better than watching a bunch of people trying to kill each other and become the last one standing? Team games! This series features a murder game where the main characters must work together to build a kingdom and “conquer” other kingdoms. To make this happen, each day each person in the group is randomly assigned a role in the kingdom and must follow the orders of anyone with a role higher than theirs (with the king/queen being at the top). And naturally, with a mechanic like this, one of the characters is a yandere girl who really likes the main character. That can only go well, right?